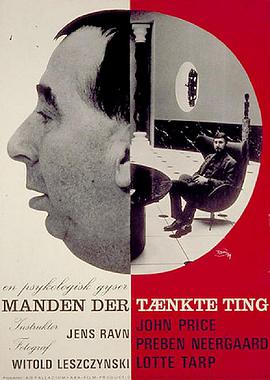 立即播放
评分：
在线播放,无需安装播放器
量子云
无需安装任何插件
HTTP下载
可能喜欢
剧情介绍
The main character is Dr. Max Holst, a successful neurosurgeon. One day an intense little man named Steinmetz shows up, who has the real ability to create objects out of thin air, using only his mind. As no one believes him at first, he is held at a ward for mental patients, but manifests the key to his door and escapes. As he has a special interest in Dr. Holst, Steinmetz subsequently invites Holst to his large mansion, which is full of expensive paintings and sculptures, and proves to him that he can in fact materialise objects. Steinmetz’s abilities are evolving by leaps and bounds, and is progressing from being able to create objects only to being able to create living things. His ultimate ambition is to be able to create a human being. He tells Dr. Holst that if he will only perform a certain brain operation on him, Steinmetz will become able to attain his goal. He’s got all the necessary equipment set up in his basement. Dr. Holst, however, is too spooked by the whole thing to agree to this mad scheme, and refuses. Steinmetz then sets about manipulating Holst’s life, to pressure him into performing the operation. By then Steinmetz has become able to create a temporary human being, and in the hope that he can perhaps make his own creation perform the operation, he manifests a doppelganger of Dr. Holst. This double proceeds to take over Dr. Holst’s life, creating chaos for him professionally and personally. And then Dr. Holst starts fighting back. The ending has the dual virtue of being both unexpected and satisfying.欢迎在线观看由John Price,Preben Neergaard,Lotte Tarp等主演的电影《那个人在想什么事情》，迅速影视- 最新电影,最新电视剧第一时间更新,最好看的电影电视剧推荐第一时间为您提供《那个人在想什么事情》百度云在线观看和百度网盘下载，如果您喜欢《那个人在想什么事情》请把地址收藏起来或者分享给的朋友们！